Flat panel antennas are primarily used for military, naval and commercial aviation radar, but are today being developed for maritime satellite communications applications.

Flat panel antennas utilising phased array technology are used for military, naval and commercial aviation radar, and latterly for applications including satellite television. Developments are in hand to make flat panel antennas a more viable option in the maritime marketplace and several technology types are in the running, with ‘phased array’ currently the most viable.

Phased array refers to a group of computer-scanned-and-controlled antennas which can produce a steerable beam of radio waves, even though the antennas remain stationary. In a Passive Electronically Scanned Array (PESA), the antenna elements connect to a single transmitter/receiver, whereas an Electronically Scanned Array (AESA) has a separate transmitter/receiver unit for each antenna element.

Another type of flat panel antenna is made using ‘meta-materials’. Though not so far into development as phased array solutions, these antenna feature passive, tunable elements, which scatter radio frequency energy when the elements are activated to generate a holographic beam, which has potential to improve electronic beam steering. A third technology will use ‘optical beam forming’ and combines both active and passive elements. 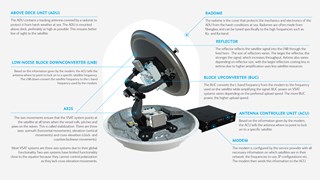 Parabolic Reflector Antennas
Parabolic reflector antennas, a.k.a. satellite dishes, are commonly used on all satellite frequencies from L-band through to Ka-, Ku, and C-band.

Cost breakdown
The cost of smart shipping is shared across the ICT value-chain, with satellite communication services, on board hardware and cloud-based digital platforms all needed to unlock the power of your data.